We've just passed the nine year anniversary of Ruby going to the Rainbow Bridge. How have the years flown by so fast? The first ... 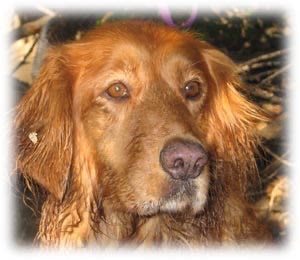 We've just passed the nine year anniversary of Ruby going to the Rainbow Bridge. How have the years flown by so fast?

The first year without Ruby was a dark and sad time. She filled my heart and life, and without her beautiful, exuberant red being coloring my every day, the world became a flat, monochrome affair. Although her spirit presence was tangible in the house and my healing studio, and I sometimes met her in the dream space, I was sorely missing a physical dog in my life.

Around six months after Ruby's sudden departure, in the depths of winter, I found myself one morning looking at a dog on the Golden Bone Rescue Facebook page that was apparently in need of a foster home. Without thinking too much about it, I applied. New Year's Day found me waiting the arrival of Chester Good Dog, a scrawny, scruffy, bandaged and stapled, mange-ridden dog who had recently been retrieved from a dump site where he'd been living near the Navajo Reservation. He was about 5 months old, had been attacked by other dogs while living rough, and had somehow been shot across the back of the neck (the vet couldn't determine if it was an arrow or a bullet that caused the open wound). And then there was the fear aggression, which meant he couldn't hear or see a dog (even himself in a mirror), without losing it.
Well, he was only a foster, I thought. I would keep him safe and love him all I could until it was time for him to go to the family who had already agreed to adopt him. 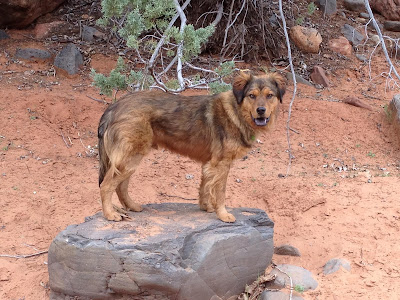 Fast forward eight and half years. 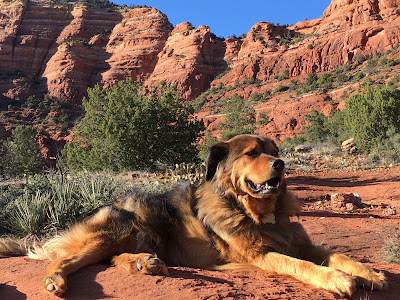 Yes, he's still with me! Now using the name Rajah (chosen by himself), the fear aggression (mostly) faded into distant memory and many adventures under our belts. In the early days with Rajah, I had wanted to continue this blog and give voice to my new boy. But he is a very different dog to Ruby - stoic, more serious , very wise and not much given to frivolity or getting into scrapes. Like Ruby, he has been a "healing assistant" in my bodywork practice, and also like Ruby, he is adored and fawned over by adults and children wherever we go. But unlike Ruby, he could take it or leave it (unless there's a treat involved), and he has a stubborn streak that makes Ruby's strong-willed indiscretions seem quite endearing.

Although Rajah and I have been on our journey these years without keeping a record in blog form, I have recently started writing about our conversations as I learn animal communication. You can find our chats here.
Posted by Ruby's Mum at 5:41 PM No comments:

A Book by Jack's Dad - for a good cause!